The picture below shows a jumble of colors. To the untrained eye its hard to make sense of it. The red is the warmest area, orange/yellow is mid temperature and the blue is the coldest.  See below for an explanation and how to interpret thermal images. 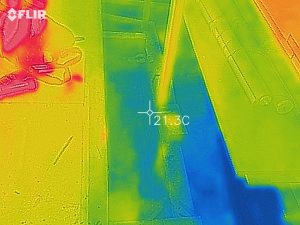 Thermal imaging cameras for building and pest inspections are a powerful and non-invasive tool for monitoring and diagnosing many potential problems. Often before they become major problems.

Moisture damage is a common form of deterioration in a building and can be difficult to spot. Materials with moisture are clearly visible when a thermal camera is used as they are cooler.

Whereas a termite nest for example inside a wall will create warmth and will exhibit dark orange and red areas.

With a thermal camera you can identify problems early, allowing them to be documented and corrected before becoming more serious and more costly to repair.

How to interpret a residential thermal imaging picture.

The images above are from the 1st floor of a residential property i inspected in July 2018. It was a cold day and the client had the central heating on.

In the images above the color blue is the coolest and red is the warmest with orange/yellow in between these 2 extremes.

Because the central heating was on the heat in the room rises so generally the higher areas are orange/red and the floor is yellow which is mid temperature. Interestingly the stair banister is red so was most likely being affected with warm air rising from the ground floor to the first.

The blue patch on the right picture is an external brick wall and you can clearly see the cold area affecting the interior wall with the window an even darker blue meaning it is colder as it is in direct contact with the cold external air. Also the blue in the left picture follows the wall perimeter which obviously hasn't been warmed to the same extent as the mid floor.

All looks quite normal so far for a cold day with a heater on inside.

To use these pictures to detect for example water leaks (cooler area) or termite nest (warmer area) in the wall or under a floor.

A water leak would show a patch of blue that is out of place with the rest of the picture, like an isolated area of blue by itself on the wall. That would require further investigation.

Similarly an area of dark orange or red not connected to the heating could display a termite nest (which generates heat) and of course would require further inspection.

Hope this has been helpful. This is just one example of how thermal imaging can be used in an inspection. I will post more in future.

Using thermal imaging to detect electrical faults before they occur. 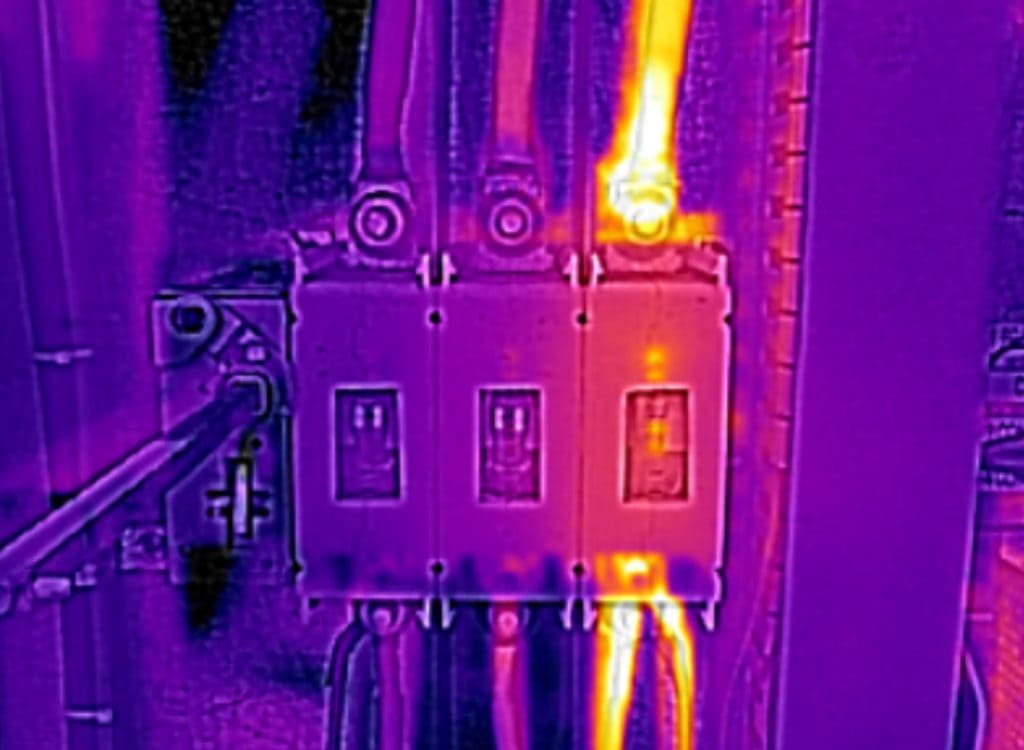 The above pic clearly shows a thermal image of an electrical 3 phase circuit breaker in a switch board.

The wires to and from the right hand circuit breaker are showing much higher temperature than the left 2.

This high temperature means there is a fault or unbalanced load on that phase and a breakdown is imminent.

This would not be seen by eye or a normal digital camera and is a great example of how thermal imaging can be used to predict electrical faults and eliminate or (or vastly reduce) down time, whether in residential or commercial/industrial premises.